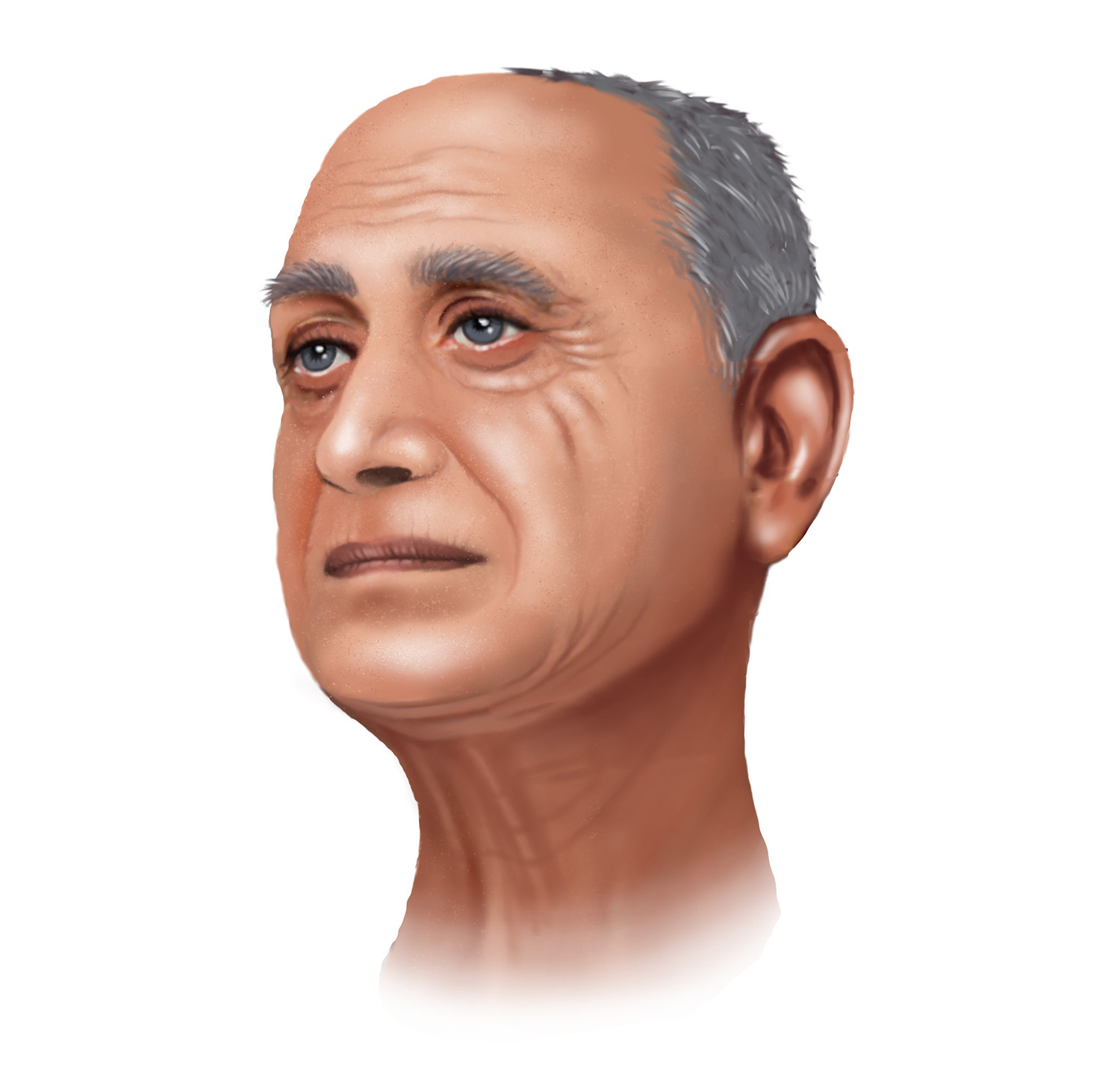 A Facelift is an operation designed to refresh and rejuvenate the ageing face. A Necklift is often part of a Facelift procedure and often directed at treating unsightly neck folds. Care must be taken to tailor the operation to the patients aims and towards individual facial structure and skin type.

Typical concerns that the patient may have include:

Some patients may have health concerns that mean a facelift may not be able to be performed due to a high-risk medical profile. Please see the section on preparation for surgery to understand better what those potential health concerns can be. 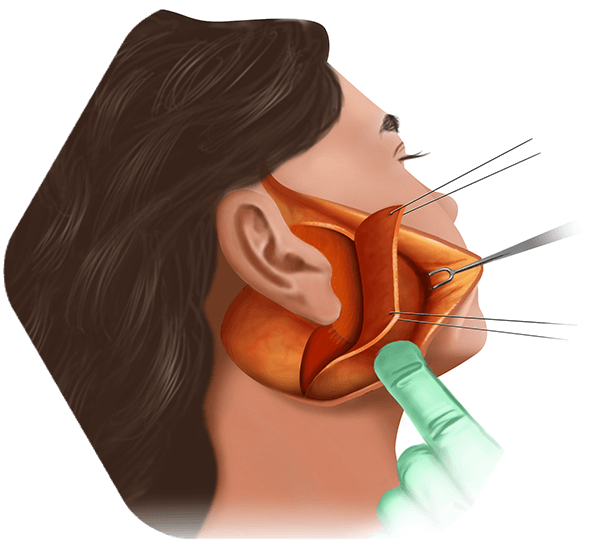 The surgery on the face and neck can be considered in a couple of steps; the skin incisions, the management of the deeper layers of the face known as the SMAS layer and volumetric enhancement. 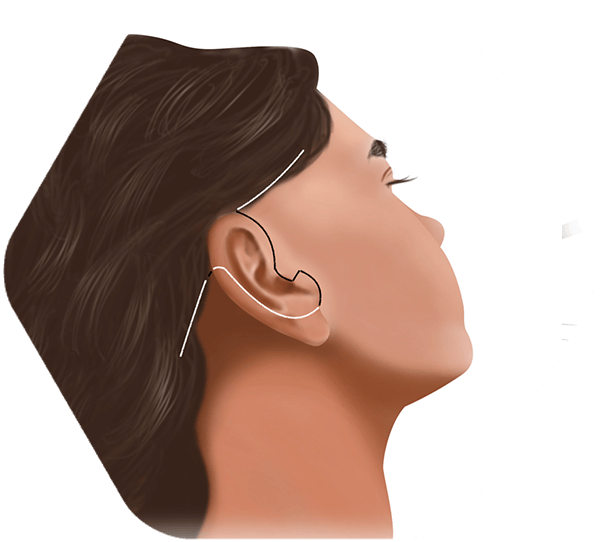 The scar for a facelift involves an incision that starts from in front of the hairline near the temple and extends over the tragus (triangle of the ear), underneath the lobule of the ear and around behind the ear to near the neck hairline.

Although the skin incision seems long, it blends well with the natural contours of the face and gives the best way of keeping the skin smooth without unnatural looking sweeps or abnormal folds.

There is a short incision underneath the chin known as a Submental Incision, which gives access to remove excess fat under the chin and to tighten the platysma muscle which is part of the SMAS layer.

The next question with a facelift is how to manage the deeper layers to the face known as the SMAS layer. This is the structural layer of the face and in most patients for whom it is their first facelift, I normally recommend a Deep Plane Face Lift (DPFL). In these operations the SMAS is dissected forward into the face and releases the anchor points of the face. The SMAS is pulled up and back in order to create a smooth and rejuvenated appearance. An alternative to this is a SMAS plication whereby the layer is doubled over in the cheek area. The SMAS plication is usually reserved for people who have already had a facelift and are undergoing a revision facelift.

To create the rejuvenated appearance following both procedures the skin is re-laid down without tension and trimmed according to how much needs to be removed.

Laxity in the central part of the neck under the chin area is due to the loose muscle and skin as well as fatty deposits which lead to the classic turkey neck or platysmal folds.

For most patients it is important to tighten the platysma muscle in the middle of the neck. This is known as a corset platysmaplasty. This involves making an incision underneath the chin, dissecting down, removing any extra fat and then joining in the muscle together in a corset fashion. By doing this and then by pulling out the back the procedure creates a very smooth and firm jawline.

The scar in front of the ear and underneath the chin normally heals extremely well and is almost imperceptible. The scar that most individuals are aware of, is the one that runs up behind the ear as it crosses the hairless area and can often be noted by hairdressers when cutting hair.

Benefits of the surgery

The aim of the surgery is to create a rejuvenated and natural appearance.  The goal of surgery is not necessarily to remove every wrinkle (as this may look unnatural) but rather to create an appearance of someone who is rested and youthful.

How long does the effect of a Face and Neck Lift last?

The short answer is ‘forever’!

The rejuvenating effect ‘resets’ the clock but the ageing process does continue. A person who had a Facelift at the age of 50 will still look more youthful at age 65 than if they had not had the Facelift. Studies from overseas show that using a deep plane facelift technique similar to how I perform Facelifts, decreases the visual age of a person by 15 years. This means a 60 year old who has just had a facelift will appear more in keeping with an average age of 45 years.

In practice, a common time when I see individuals who would like a second facelift is usually around 15 years are their first facelift.

Facelift surgery can take anywhere between two and seven hours depending on the elements of surgery that have been incorporated. For longer surgeries patients do require a night in hospital afterwards. There will be a bandage placed over the ears and sometimes under the neck following the surgery. Small silicon drains may be used in order to reduce the amount of fluid collecting at the front of the neck after the surgery. The drains and the head bandages are removed at day two following the operation. Dissolving stitches are used behind the ear. The stitches that need to be removed after the surgery are usually in front of the ear and these come out at day seven following the surgery. Patients will notice some bruising on the face and neck which can last up to two weeks and occasionally longer. There will be swelling of the face which is partly due to the operation and partly natural swelling that occurs after surgery. I reinforce to patients that when they wake up the face will feel tight. This can be a sensation that can be distressing (as it feels like an anxious sensation) but it does get better over three or four weeks and that tight feeling is good, as it reflects the type of surgery you’ve had. Please see the section on after-care for more information

Potential problems that may arise and how they managed

Sometimes there can be a little bit of bleeding from the incision lines which usually stops with gentle pressure for up to three minutes. If the bleeding hasn’t stopped after three minutes please give us a call at the office for further advice.

This is a problem when a small amount of fluid has collected underneath the skin. This is much less common in facelifts than in other surgeries and it simply needs a small needle drainage to fix the problem

Occasionally there can be small areas where the incision takes a little longer to heal. This can be normal especially behind the ear.

This occurs rarely. This is where a nerve that supplies the motor function of the face can be affected by the surgery. The most commonly affected nerve is the Marginal Mandibular Nerve which runs underneath the jawline to supply the corner of the mouth. If this has been affected by the surgery it can look like the person has had a stroke. Often this is temporary but occasionally could be permanent. I personally haven’t had this problem in my practice for any facial surgery but I do hear from others that if it does occur it can be very distressing.

Everyone has different aspects to their face and are different on each side. There will always be some subtle differences between each side and that is to be expected.

Occasionally following the surgery, you can get blood clots in your legs. This is a risk of any General Anaesthesia but it’s fortunately rare in facelift surgery. In order to minimise the chance of this we are careful to ensure patients have calf compression devices on during the operation which massage the lower legs and keep the blood flowing. Following the surgery we also encourage patients to mobilise early by walking around.

There is a sensory nerve that runs up to the ear lobe known as the Greater Auricular Nerve. Occasionally this can be affected by the surgery meaning that the sensation to the earlobe changes. More commonly for patients is that they notice the outer aspect of the cheeks is numb following the surgery. This is due to elevating the skin of the underlying tissue.

Sometimes people make the scars that can stretch. I do my best to ensure there is no tension on the skin at the end of the procedure which means that getting a poor scar is less likely.

The most common procedure for Facial Rejuvenation that I offer is

There are other techniques available such as a MACS lift, Thread lifts, Subperiosteal lifts and Skin-Only Lifts. I have tried these techniques in the distant past and I found they were not able to give reliable and long lasting results.

From both my own experience and from overseas research, the DPFNL offers a safe, reliable and cost-effective procedure for facial rejuvenation for all patients undergoing a primary (first time) Facial Rejuvenation.

For those patients needing secondary or revision facelifts, I usually offer a SMAS plication as it is safer in terms of protecting the facial nerve and it is effective in those who have already had a SMAS-Lift.

Additional Procedures During a Facelift

Procedures that can be combined with a Facelift:

I hope you find these guides helpful in preparation for surgery and for your recovery. It will cover general details of surgery and the normal way that individual’s recover after facial surgery.